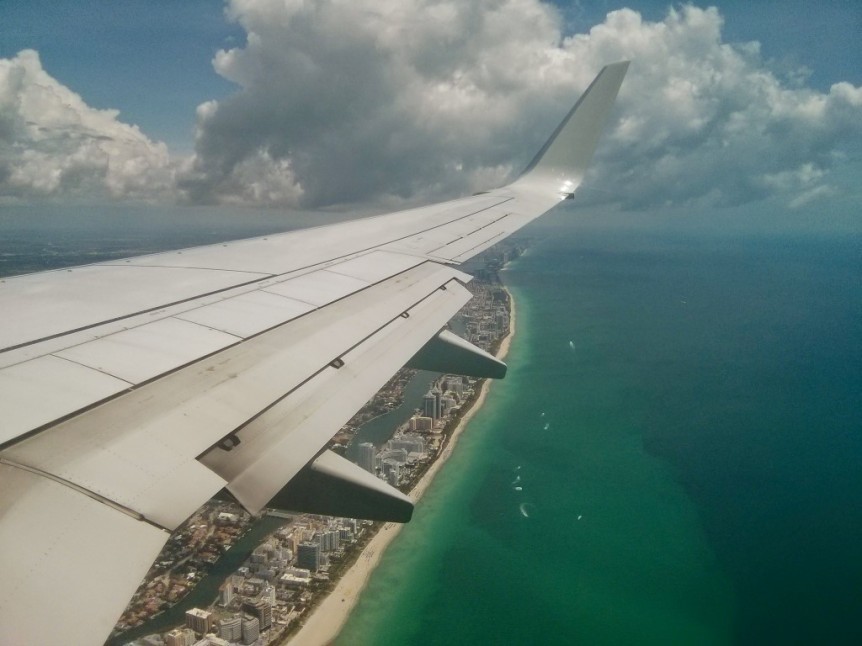 Want to know how to quickly get from Miami Airport to Miami Beach or South Beach? Read on…it’s quick, relatively easy, and very inexpensive compared to the alternatives.

Recently, I was returning from Medellin, Colombia to St. Louis Missouri with a long layover at the Miami Airport. It was 11am and my flight was not until 7pm in the evening. Many people think: “Oh, this sucks, now I have to sit at the airport for 8 hours and hang out at Starbucks or something.” I thought, “Let’s hit beach!” Seriously, I’m in Miami…Miami Beach or South Beach, here I come!

Miami Airport to the Beach: Asking the Locals

Normally, the best way to obtain information information about how to do something in a local area is to ask the local people. In this case, that did not work. I inquired with about 5 people and all of the conversations went like this:

Me (smiling, jovial, and courteous): “Excuse me. I have a long layover in Miami and I was wondering if you knew of a way I could get to the beach.”
Them (Confounded): “Do you have a car?”
Me (thinking I’m traveling dummy but responding politely): “No, I just arrived at the airport so I’m car-less.”
Them (as if it’s obvious): “Well, you’d have to go in a taxi. Either that or rent a car.”
Me (persistent): “Ah ok, there is no public transportation?”
Them (no more patience): “Not that I know of!”

After having lived in Uruguay for many years and recently in Colombia, the number one mode of transportation is the bus or some form of metro. However, in the states, the bus is not oft considered a suitable way to travel. It’s beneath most people (in the case of a metro, this is literally true). I even asked the workers at the airport and they had no idea short of a rent-a-car or taxi. Does nobody ever want to get from the Miami airport to the beach during their long layovers. People…live a little!

But I would not be so easily misinformed. The options given–a rent-a-car or taxi, both would run me about $75-$100 and were not worth the trouble. So I gathered up the local literature and found various ways to get from the Miami Airport to the beaches, both Miami Beach and South Beach. They do have trains but none of these seemed viable and then I found a pamphlet for the Miami Airport Flyer (Route 150), which goes from the Miami Airport straight to the beaches of Miami Beach and South Beach for $2.35 (round trip less than $5), quite a big savings from renting a car or taking a taxi.

How could people not know about this? I think perhaps because it’s a somewhat new service.

It can be a little tricky to find the Miami Metro flyer. It’s not in the bus terminal at the airport. You need to take the MIA Mover to take you to the “central station” (takes less than 5 minutes). Here is a map to tell you how to do it. The bus leaves about every 1/2 hour. When I arrived, a bus had just pulled up so I was able to jump right on.

So, how was the ride on the Miami Airport Flyer 150 from the Miami Airport to the beaches? I was a little skeptical about this mode of transportation. As the people above, I perhaps had a little trepidation about taking a bus in a city that I did not know. Would it be sketchy?

Not at all. The Miami Airport Flyer 150 is a comfortable ride and just like most airport shuttles and very unlike most city buses. It has spacious luggage racks and a roomy, airy feel. I got off the bus at the Lincoln Road and Washington Avenue stop in the center of Miami Beach, walked four blocks, and had my toes in the sand, sunny beach, and beautiful girls (see photo below!) as far as the eye could see.

And, you’re not even limited to the beach for your day of fun. After 4 hours of toes in the sand, I had another thought: Beers in Miami Beach.

I stumbled upon a bar called the Clevelander where they happened to be filming a show on ESPN I often watch called “Highly Questionable” with Dan Lebatard”. I met Dan and his dad–a goofy fun pair they are–and then I talked to the guy next to me who builds skate board parks for a living and is the former best friend and business partner of Rob Dyrdek, the host of Ridiculousness. He was doing the same thing I was: Hitting the beach during his Miami layover and we ended up being on my same flight. Go figure!

I only have one note of caution about this little layover adventure. They will tell you that it takes about 25 to 30 minutes to travel from the Miami Airport to the beaches. And, this was true getting there. However, on the way back at about 5pm, it took upwards of an hour due to traffic and a few people were freaking out about missing their planes. Other than that, the Miami Metro Flyer is a gem!

So, in the future, whenever you have a 5 hour layover or longer in the Miami airport, jump on the Miami Metro flyer and have a day at the beach. It’s worth it (see pictures below)! 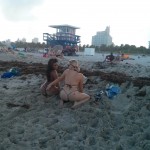 The Girls of South Beach 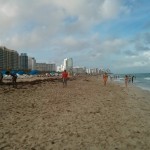 Miami Airport to the Beaches: Other Valuable Links and Resources

Route 150 Miami Beach Airport Flyer: More information on the route 150 if you have a lot of time to explore. As I said though, for a layover, just go to Lincoln and Washington and you’ll be all set.

Richard CummingsMiami Airport to Miami Beach & South Beach: It’s Easy But Few Know How To Do It.